When this lady, Hillary speaks,you feel like listening.It is not like the rhetorical diatribe that Mrs.Gandhi comes out with everytime she makes a serious speech.Last week Mrs.Gandhi spoke about the office of profit debacle,her point was that many in the Ganges heartland doesnt like her and all that debate in both houses of parliament was because these MPs hate her.It seems these same MPs hated Indira and Rajiv as well,its all personal.She didnt make sense,she cant expect us to sob and cry and call her back everytime she plays this all sacrificing ‘bahu’ persona.Its true that we like her,but she shouldnt be exploiting our fondness for her every time elections happen in some state.

Hillary Clinton,she was giving this fourty minute long -at times rambling speech in Brown University,C-SPAN was airing it.You like her for the wide variety of things she speak about,at times she opens a whole new perspective on a topic.She’s got clarity,strength and a sense of urgency.The political part of the speech was pure rhetoric and mostly around the blunders of the ‘Mission Accomplished’ administration.That part comes easy I suppose because everytime she said ‘our President’ the crowd laughed their hearts out for no understandable reason.The second part of the lecture was fresh, and nicely done too.She spoke about,

When she started practicing law,there was this unique office decoration protocol.If you are a guy, you fill your office with family photos and kids stuff so that people think you are a devoted person with family values.You are from the fairer side,anything that reminds you of family is out of bounds in office,because that would be a sign of a distracted professional.Hillary according to her, camouflaged office space with family signatures. 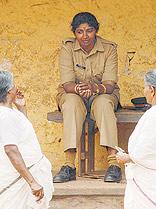 Descriminations and prejudices of this kind are widespread even today in conservative streams like law as well as sunrise streams like information technology.I know of this Business capablity command center where women work on monitoring the health of systems but in the connected high visibility crisis management group its an unwritten rule that only men should be on the team.This often if not always has a debilitating impact on the women members of the team,they find that few floors are out of reach no matter how hard they climb.The reason cited for the above was women get married,relocate,brain drain,odd hours,pregnancy – except for the last rest is common for both sexes and as for the last I think organisations should be mature enough to understand that women get pregnant.Such an exclusion affects the team in such a way that these women employees stop competing, rather contributing,they dont give a darn if the system goes to hell ’cause they are not the system anymore.Rest is what we see around us.

Hillary’s mother didnt have a dryer thereby spending her entire afternoon doing the laundry.Nowadays new technology and small families create a lot of productive free time which was spend earlier on these mundane chores.Women should put it to better use,they should dare to compete.

I thought about India,we had excluded women from nation building for a very long strech of time,on top of it we excluded dalits from our thought process,we had divided the rest into four ambiguous groups and again restricted any free flow of ideas.What a waste of human capital and we continue to do that as much as we can.Now I have to contradict myself,women work from dawn to dusk and after that, in some two hundred million households in India,they raise the next generation,feed the future India with food,ideas and values – I think this could be nation building – though it never shows up on the national product,never gets recognized anywhere in developmental economics.

Many of these women are denied a say in household decision making as they dont have any measurable produce.It would be fun if they stop all their work for a week,just to measure the kind of impact it causes.

Almost half our women cant read or write,not that literacy is so important,but the world around us is changing,economics is changing,we cant be a peasant country anymore,hands to mouth existence of Indian villages will have to undergo radical changes,economic output per household will need to increase in the indian countryside as the market dynamics set in,indian villages will have to consume more if this nation needs to go any futher from here and for this incomes will need to increase and it cant be done without value adding extensively to our products.This where education becomes a basic need from now on for the Indian woman.

A clear shift from ‘welfare’ of women to ‘well-being’ of women and womens’ ‘agency’ is needed in our policy orchestrations.Respect and regard for womens wellbeing,is enhanced a lot when she has a economic and social role outside the household.Empirical data says so,one respected feminist economist wrote.

How does one manage office and home ?

She said ‘everyone of us is a pioneer’ and went on to say some bad jokes.
That was one great answer.

The first genocide of 21st century

Is happening in Darfur,she said.Women and children are the worst hit.Killings,abductions,gang rapes and more evidently mutilation of body parts to leave a stigmata of a lifetime are occuring at mind numbing rates.The west needs to intervene.

The west had apologized for Rwanda,Sudan seems to be the mother of all Rwandas.I tend to believe that if Hillary was the Commander in chief of the world instead of Bush,she would have send her troops to Sudan instead of Iraq.War and abject poverty in the dark continent undermines all the glory human kind has acheived in this world.

Hotel Rwanda said ‘nobody cares about afrikans,they are not human,they are not even niggers’ – I agree,if one hundred thousand people get killed somewhere in godforsaken cantsaythename place in Africa,its just a number for us.If it happens in Europe,it will be World war IV.

Constant Gardener said women never went to war anywhere – we can think about this.

Hillary showed that she can make people think and still be a politician and I believe she should run for the President of the United States.Not that she should win,but that will be one hell of a campaign to watch.

Back home,dear Mrs Gandhi is fighting another election.Nobody asked her to resign,nobody asked her to contest again,we’ll spend a lot of our money to bring her back into parliament where she will be doing absolutely nothing and we’ll wait for her to cry and resign and leave and contest again when some Samajvadi party MP snorts.Not that we have an issue with that,the Gandhi family has sacrificed so much for us,we continue to love them and Mrs Gandhi is so adorable a person,but I really believe madam could put her time to some better use – like make some nice pizza or something like that.Maino,think about it.