In the cold ramparts of the red brick apartment complex where the walls smell like yesterday’s rain , stands the ghost. She lurks there suspended like a mystic cloud of detergent smelling moisture that hangs between the cloth lines on the patio. The dwellers, aware of something like her that exists talks about some girl who jumped to forgetfulness in their already cluttered memory.The ghost, with her innocuous and at times lazy self does not particularly take the white prada worn by her type – the last time I saw her teaching the weeping willow to cry, she was wearing blue jeans, tee and slippers.

She sleep-walks the stark clean aluminium balconies; giggling at some unshaven husband’s travails as he tries to peep into the spinsters’ ghetto, singing to some eight hour dead child who cries for the lullabies he missed and shaking the chempaka tree by my window side to wake me up from my confined sleep. No one hears her, no one hears a ghost. 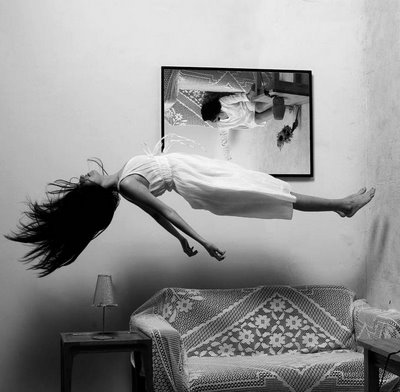 She lives the cruel emptiness that spirits only know. She is unsure of herself and wants to be heard though she treasures the blue loneliness of being a ghost. It is with a lot of effort that she drops a miracle or two , just to let us know she needs some advice. The other day she bloomed a rosemarys night flower at the parsi lady’s house at noon, but the old lady absorbed in the soap opera’s curves did not take notice. She has been doing too much alone and wants a word with someone before the bleakness drives her mad. One day she finished homework for the little kid who feeds the ducks,but nobody notices anything in town. Even kids do not see fairies in town.

Nowadays she cries most of the time, without reason, without break. She weeps her innocence with a poor wrenched out heart in hand. In the cold ramparts of the red brick apartment complex where the walls smell like yesterday’s rain she cries, she stands behind the pillars of the empty parking lot and cries. She cries. Then at times she gets so sick of crying, at times she thinks of dying. Then again, nobody will know. Then again she needs to catch the early bus to reach office in time. Its raining.