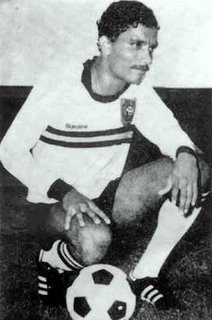 “Everyone remembers a cricketer who has played for India,even if it was for a single game.I was the Indian football team captain in ten tournaments,12 years I’ve been in the Indian team….do you atleast recognize me?” – v p Sathyan (to Mathrubhumi)

India reached its highest spot in FIFA rankings during Sathyan’s captaincy,India defeated South Korea(4-3)with a last minute goal from this defender in Merdecca cup -one of the greatest moments in India’s soccer history,Indian Footballer of the year 93.Atleast some of these tags should be in our collective memory Kerala Police,Federation Cup,1992,Santosh Trophy,Sharafali,Chacko,Sathyan,Pappachan,Vijayan.

Its not about Sathyan,but Indian football as such.This is one game where you go in to die for the country whether you win or lose.Its a bit sad these young men never get the recognition they deserve. Sathyan, struggling with debt, jumped in front of a train and ended his life yesterday,he was 41.