One and the only

One and the only

After these months of blogging,when I look back,its feels so awful that I have not lend any space here to the person I adore , admire, hear and read about the most . The one person who brings a smile to my face every single day knowingly and unknowingly . So now is the time for my man,My Hero. 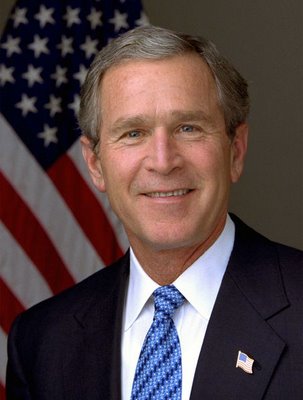 Any day at work,if the morning stampede of emails is too much for me to take,I close my lotus notes and browse through the Leno,Stewart,Colbert and Letterman’s ‘late night jokes’ . They would have said something very funny about my guy and folks that would be the hundredth time I’m hearing it,but it makes my day. Some real gems (yeah you’ve read it before !),

“President Bush traveled to his ranch in Texas for a ten-day vacation. The president said now is the perfect time to take a vacation when everything in the world is running so smoothly.” -Conan O’Brien

“President Bush is now in the second week of his five-week vacation down there in Crawford, Texas. He’s been taking a lot of criticism for this long vacation and his aides say he has his laptop with him so he can still play Solitaire and Minesweep – so it’s business as usual.” -Jay Leno

“President Bush earned $400,000 for his job as president last year. That’s not really that much for being president when you think about it. But President Bush, he doesn’t do it for the money, he does it for the eight months of vacation every year.” —Jay Leno

“President Bush said catching a 7.5 pound fish was his best moment since becoming president. You know the sad thing, a lot of historians would agree with that.” –Jay Leno

“No, he was fishing on his ranch. He has a manmade lake that is artificially stocked with fish, and let’s not forget the scuba divers who are under there who actually put the fish on the hook for him. And then Cheney comes over and they literally shoot fish in a barrel. The part I love is that he says he caught a 7.5 pound perch, when the biggest perch on record is 4.3 pounds. Bush lied and a fish died, that’s all I have to say. And Cheney went even further. He said when they pulled the fish out of the water it greeted them as liberators.” –Bill Maher

“President Bush announced that the federal deficit is actually $296 billion less than originally forecast. It’s less, yeah. The president credits low unemployment, high job growth, and the fact that he did the math himself.” –Conan O’Brien

President Bush was in Los Angeles yesterday where he announced his new campaign theme — ‘Safer, Stronger, and Tested.’ Isn’t that a condom ad?” —Jay Leno

President Bush fell off his bicycle this weekend and you know what was really sad? It’s a stationary bike.” —Jay Leno

“The president finally explained why he sat in that classroom on 9/11 for 7 minutes after he was told the country was under attack. He said he was ‘collecting his thoughts.’ What a time to start a new hobby.'” -Bill Maher

And someone said ,one of the books my Hero has taken with him to Texas for vacation reading is Lincoln’s biography ,boy, dude will be really upset when he finally reads the chapter where Wilkes Booth assasinates Lincoln .It would be a terrible shock , feel sad for him.

In case nobody else has said anything about him,Dubya would say something himself ,like ‘They misunderestimated me.’ . Its like whenever I’ve done something really stupid and feel all alone , I go directly to CNN and checkout what Dubya has said lately . After that its that feeling of brotherhood man.

“I believe that a prosperous, democratic Pakistan will be a steadfast partner for America, a peaceful neighbor for India, and a force for freedom and moderation in the Arab world.”
-Dubya , Islamabad, Pakistan, March 3, 2006

“I am here to make an announcement that this Thursday, ticket counters and airplanes will fly out of Ronald Reagan Airport.” -Dubya,Washington, D.C., Oct. 3, 2001

“Our enemies are innovative and resourceful, and so are we. They never stop thinking about new ways to harm our country and our people, and neither do we.” —Dubya,Washington, D.C., Aug. 5, 2004

Well…… we too have a prime minister in India . When someone told me our next PM is a sardar I had great expectations . Guys, democracy is boring (bigtime !) unless you have guys like Dubya . Our Sardar ,leave alone cracking a joke ,actually read out from a notebook while proposing a toast to that chick – my Hero’s wife when she came calling . How can a person lead one billion people with no humour sense . Sardar’s so stoic , so red-taped – neways, he is no leader of the nation , just a chief executive.

“no no Mr President its not Ali Baba ,no not Ali Baba …its AYATOLLAH….no he didnt kill fourty terrorists….yeah…oh…ok…its my pleasure…ok bye”

sorry guys that was my Hero on phone….so…ciao 🙂