11 AM : All hell broke loose. Tree branches were flying oustide along with roof tiles .Somebody later said that cows,alligators,bill-boards and eighteen wheeler trucks were also flying around. I didnt see this and so i dont believe the bill-board part. The last window in the second bedroom crashed a few inches from me and we were in the open now .

Wikipedia: Hurricane Wilma was the most intense tropical cyclone ever recorded in the Atlantic basin.

According to Wikipedia, there are three places in space and time that you need avoid at any cost : Vietnam in 1965 ,Pakistan in 2015 and Florida in 2005 . Now that I had avoided Vietnam by birth and there is another nine years to go before India nukes Karachi ,I look back at the biggest miscalculation I made – being in Florida in 2005. But yours truly didn’t have much of a choice there,you know – I was just an errand boy, sent by grocery clerks, to collect a bill . 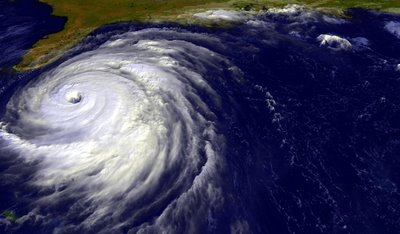 Hurricanes as such are pretty cute,they look like fluffy rabits or Pomeranian pups – assumption here is that you are looking from the International space station’s small window . On the ground, its feels like your box has just disconnected from the top of the ‘Giant Wheel’ – that cool air blowing fast and your view changing every split second – webster calls it ‘Horror’

Exactly an year before this day,the first major storm hit us,it was a Category one hurricane named after a bombshell – Katrina . It was so funny that I made my first home video that day,stuff flew around,trees fell but all in all it was fun with office closed for two days .Oh yeah,power went out for an hour – c’mon you kiddin me,you know where I come from ?
Katrina came from the Atlantic brushed past us into the Mexican Gulf ,became a category five hurricane and went on to kill 1800 people in New Orleans. It became the costliest natural disaster in the history of the United States . The last time someone killed these many people here, my Hero blew up two countries , this time he actually planned to invade the Atlantic Ocean but was later pacified.

Then came the day of reckoning ,the day when Wilma came. October 24th,2005. Events of the day.

2 AM : Somebody is still singing something. 2 AM advisory comes on TV,Wilma has gained strength and now is a Category three hurricane ,predicts landfall in another four hours , we are right there at the center of the projected path.

someone : Do we need to evacuate ?
me : Do we have more chicken ?
Raka : I’m putting some more…wait no 🙂

someone : Do we need to evacuate ?
Raka : shuttup damu !! this is all media hype
me : last time katrina came nothing happened no

someone : But Wilma is cat 3 man
Raka : Wilma avantammede…. (Wilma is his mother’s…)
and Raka went on to say some nasty things about some Vimala. I was about to ask him who that was – but chicken came.

me : Hai chicken..umma…but Raka…you used a term for all this…what was that..
Raka : MEDIA HYPE
me : love that term,appreciate it !

8 AM : Wakes up . the first pangs of the storm are arriving,I can see uprooted trees along the avenue road. Shoots some video from the balcony,cant really hold the balance as the storm is pretty strong .

8.30 AM : made coffee. Inside the house its safe but power just went off . Call from offshore.

9 AM: I went back to sleep cracking jokes to myself about media,medium,medicine and all those words starting with ‘medi’ and suddenly there was some exploding noise in the other bedroom and pahadi came shouting into my room in some strange dialect. Later I realized it was fast-hindi. The whole glass window had crashed into the room with glass all over the floor.

9.30 AM : The sound outside was unbearable .It was like four turbo-jet engines switched on at the same instance. (i dont know how that one sounds – but you can just imagine for now). Everything in the bedroom was moving around ( watched Poltergeist ?) and outside every single tree had fallen down . Across the lake,the park looked like erstwhile Nagasaki . We tried shutting the bedroom door,but it got bend into a concave shape with the wind sucking it through the broken window.

10 AM : The balcony window crashed completely with glass all across the living room.Stuff started moving around there too .We could feel the storm now ,it roars – literally . TV and its attachments stood a very bad chance of flying out,so we moved it to the safe second bedroom.

10.30 AM : It was calm outside and fully silent.The eye of the storm was passing us – with the deadly second stage remaining. Builder made plans for his funeral and kk as usual had bread with butter-milk,I took some photos and had a muffin.

11 AM : All hell broke loose. Tree branches were flying oustide along with roof tiles .Somebody later said that cows,alligators,bill-boards and eighteen wheeler trucks were also flying around. I didnt see this and so i dont believe the bill-board part. The last window in the second bedroom crashed a few inches from me and we were in the open now . Within a few minutes a part of the roof collapsed inside the house – my roomie was playing antakshari alone(sitting) there till a few minutes back. Just miss. 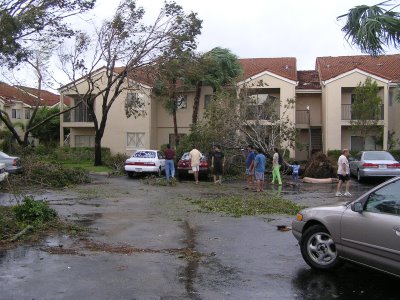 11:30 AM : Roof was trying to fly off and roomies were now singing the same song again and again.

I was hearing this song for the first time. One neat song it is.

12:30 PM : There was no house – atleast the way we knew it .It was shaking a little bit,we had to do something before it fell in the lake – oh shoot – there was no house .We decided to use the last weapon . The dare-devil run was the fastest I ever made.Things were flying around and we had to jump over some fallen trees and we didnt have a clue around which place was safe.

2 PM : Its over. Wilma was the most intense hurricane in recorded history.

Raka : I have something else – (one bundle of playboy magazines come out)
Everyone : *happily everafter*

Funda : eighty or eighteen – one chilled beer and something naked 🙂 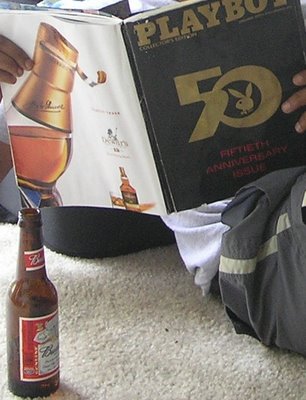 Ernesto, the first hurricane of the 2006 season hits us in another two hours. This time we did all the preparations,we have stockpiled coke,chips and ice-cubes,played football in the evening and put up a board saying ‘death to hurricane’ . The last advisory says the storm is weakening on its course from Cuba, so unless I accomplish something very stupid like getting myself killed,will be updating this space pretty soon . Neways , love you all 🙂