the day after the festival

Home/Hmm/the day after the festival

the day after the festival

The entire road from Raj Bhavan upto the Assembly Building would be closed to traffic by six in the evening . All those Victorian buildings would be illuminated and you have a two mile strech all for yourselves – everything in the world that costs less than ten Re. will be available on the road .

Nowhere in the world could a keralite see Yesudas singing at Chandrashekaran Nair, Kochin Kalabhavan and Jayaram performing at Public works , Shobana dancing at Nishagandhi , the entire Kalamandalam galaxy at Kanakunnu palace, Muthukad trying to make the Art Gallery disappear ,KPAC performing at Tagore Theatre,Charlie Chaplin film festival in Kalabhavan and Usha Uthup performing at Poojapura grounds *and at the fag end of her show,Mohanlal getting on to the stage and dancing with her – the ground is by his home * – all this in one night , in a three mile stretch : imagine.

Personally , what I liked the most was the carnival setting with Merry Columbus,Torra Torra and the one and only Giant wheel – the highest in the world. Ok fine..you looked up Wicki…but it was very close,you could see the entire city skyline from top of it . Then came the elephants, amazing big ones, upcoming terrors, smug faced palm leaf eaters – one passion that still clings on . And I shouldnt miss this one – Nishagandhi – the most romantic place in the whole of Museum junction ;the late night movies – last one I watched was ‘Satya’ – in that gigantic open air theater is one experience you shouldn’t miss in the capital .If you dont like the movie,just recline on the grass -you have a starry spring time night above .

And then the day after the festival. We used to hang around the palace in the early morning – first it was those ‘cycle tours’ and later jogging around the museum circle . All around was the smell of elephants from the previous days , all the illumination coming down , tamil workers dismantling the Giant wheel ,the local clubs clearing the athapoo stalls, the tall stage at Nishagandhi lying all deserted and the pervading feel of the vacation ending. We knew it was all just glitter,but how we wished it stayed a little more. 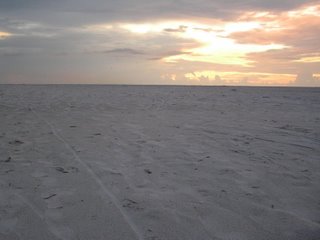 Yet another Onam passed without me actually knowing it and hence thankfully there is no Ulsavapittennu hangover. We guys hanged out at some far-away godforsaken beach with white sand. On the way back I got my first SMS saying they’ve dismantled the giant wheel. Oh well fine,then you guys enjoy – I texted back . I’ve kept away from the low key malayali samajam events out here, not that I have anything against them and I do respect the work they are doing but I’m from the capital city and our Onam is not defined in the wickipedia.