Iran and USA – why cant they talk ?

Home/Hmm/Iran and USA – why cant they talk ?

Iran and USA – why cant they talk ?

“One of President Bush’s daughters had her purse stolen while she was in Argentina. The big problem was his plan for Iraq was in the purse. Looks like we have to start all over.” – Jay Leno

President Bush is in Europe. Today he visited the country of Estonia. He thanked them for sending troops to Iraq. His exact words were, “Those two guys are doing a good job.” – Conan Obrien

Jokes apart, the mood in the USA is one of despair, the civil war in Iraq has turned out to be the nations worst ever nightmare with comparisons to Vietnam and no easy way out. The news channels are flooded with casuality reports from Iraq and a mounting death toll of american soldiers. Lebanon is headed for another stint of instability, Jordan suspects an imminent Islamic outrage and to top it all Jerusalem is still burning – maybe Saudi is safe, but how safe. The writing on the wall is crystal clear – middle east has exploded and there is no way out. Hope is no more a strategy and despair is not a method. This is where Iran becomes very important. 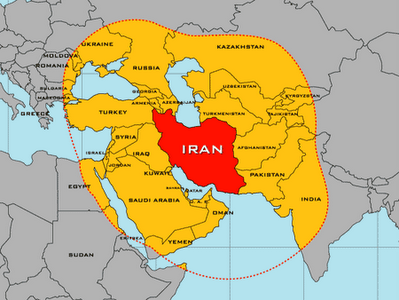 Iran on its on will not destabilize the Persian gulf region. Iran is the only country that fought the Taliban militarily before 9/11. It has high stakes in the future of Iraq, Afghanistan and stability in the persian gulf as the country heavily depends on the crude oil trade in the region. USA as such has no leverage in the Shia world and normal relations with Iran will help reining in the Shia militias in Iraq and averting an impending apocalypse. It will also help in bringing normalcy in Lebanon where Hezbollah is answerable only to Iran. Syria will automatically fall in line. Now if we look at the map, the mid-east picture could change. Then why cant these guys talk ?

The differences and mistrust between USA and Iran are because of several reasons,

from USA’s perspective it could be,

1. The Hostage crisis and its fallout in the American psyche
2. Iran’s support for Hezbollah and Shia militias
3. Iran’s overt statements and actions against Israel
4. Iran’s aspiration for a state-controlled-capitalist economy defended by a nuclear arsenal
5. Overall threat perception in the media and intelligentsia

1. Mossadegh’s overthrow and Shah’s installation
2. US’s overt support of Saddam in the Iran-Iraq war
3. US’s attempts to destabilize the Islamic republic
4. US’s support of oppressive regimes in Saudi and Iraq
5. Palestine and the “Zionist” Israel supported by the US
6. Axis of Evil statements by the US after 9/11
7. US has virtually surrounded Iran – they are in the gulf, Iraq, Afghanistan and Armenia.Its quite obvious they want the bomb.

At the same time,

1. USA has destroyed Iran’s enemy No 2 and 3, Saddam and the Taliban.
2. Al-qaeda is a threat to both countries, US and Shiite Iran
3. Iran and US want peace in the persian gulf
4. US investments in Iran could reduce its dependency on oil money
5. Iran’s leverage in the region could possibly offset an instability in the Saud kingdom 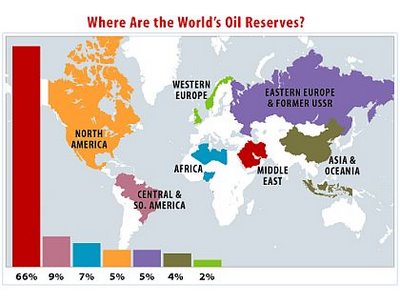 The world we live in depends a lot on middle-east as you see in the picture. Iran,USA and the world at large stand to gain from direct talks between the two countries and normalcy in relationships. Iran will have to accept the state of Israel and end its diatribe against the Jewish state which is not helping anybody. USA will have to urgently workout a road-map for a Palestine state. The situation in Israel occupied territories of Palestine is very ugly and getting worse by the day. This one single issue is the primary political cause of terrorism in the region and the world’s only super-power should show the spine to address it. Clinton did it, Bush messed up.

The point in starting a conversation is that a channel would be open between the two countries, there wouldn’t be drastic steps from either side if talks are on, mutual mistrust will be cleared to a some extend and maybe Israel will start behaving. Iran will not risk ending a dialogue with the USA by making stupid statements like ‘Death to America’ or ‘Nuke the Zionists’. This will pacify the tensions in middle-east to a large extend. Converse is the word on the street.

There have been media reports that the Bush administration may militarily target Iran’s nuclear installations. That would be a bad move. Maybe Bush wants to use the WMDs he found in Iraq. Then again if Saddam had WMDs, Bush senior should be having the receipts, right ? 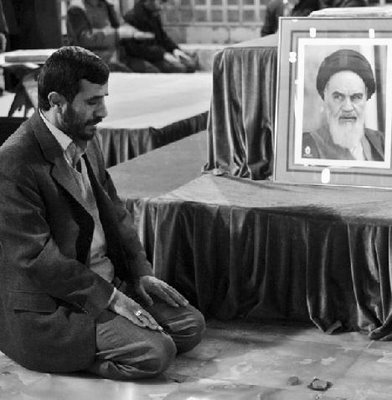 Iranian President’s open letter to the American people was published today morning. The letter as usual has been trashed by the media here. But the american public has this unique habit of making their voices heard, like they did on Nov 7th when the Republican’s were routed in both house and senate. Hope they will give peace a chance.