Who are we? We find that we live on an insignificant planet of a humdrum star lost in a galaxy tucked away in some forgotten corner of a universe in which there are far more galaxies than people.

Half of the world lives on less than two dollars a day,the palestinian streets hate Israel more than ever,mesopotomia is at the verge of civil war,the new peace is uneasy in mogadishu,the earth is the hottest it has been in the last two millennia,the poorest nations on earth have a debt of half a trillion dollars,half of the worlds largest economies are corporations,all the developing world together spends thirteen billion dollars on basic health and nutrition – Europe and USA spend seventeen billion dollars on petfood,Acquired immune deficiency syndrome is all set to increase the per capita income across africa,at the trigger point of Kim Jongs cracker lies the powder house of Star Wars and the end point of deterrence with mutually assured destruction,Women do two-thirds of the world’s work, receive ten percent of the world’s income and own one percent of the means of production,to top it all,the whole human race is in disarray – bearded mullahs in central asian caves think US is their biggest threat,US thinks mexicans are their biggest threat,Mexico thinks China is their biggest threat,China thinks Taiwan,Taiwan thinks Australia,Australia thinks India,India thinks Bangladeshis.Bangladeshis dont think cause they are busy crossing over into Assam.

At this point in time, with severe internal conflicts tearing us apart how prepared are we for an intergalactical alien attack from the Distilled Gogilba galaxy in sector three of Dondalavan sub-system ? (or some other system)

Who will save the human race ? (or whatever is worthy of it)

Oh …yeah any lex luthor can get it right…after a long long wait,years of tiresome robocops and cobweb superheros,the man will be back on June 28….the man…the super ….Superman !!!

Lex luthor fans have already started vandalising Superman posters in parts of Tehran,Baghdad,Pyongang,Damascus and all across the axis of evil 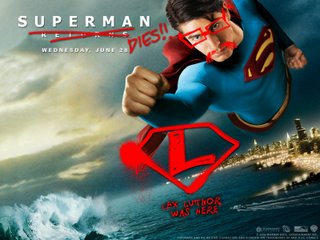 Get our old copies of DC,refresh whos who,note the bad guys and make our man’s return a Blockbuster !

Is my roomie Boya superman ? – he fixes bugs in seconds,he crushes bugs in our kitchen like a boya constrictor,he makes lemon rice in minutes,he can overturn a JCB and even eat me though I havent seen him do that.