Mother of all fears

Mother of all fears

I write entirely to find out what I’m thinking, what I’m looking at, what I see and what it means. What I want and what I fear. Analyzing what my worst fear is,I could give sophisticated answers like Google taking over the world or a simpler one like a sub-system attack from Dondalavan arc-nebula in the Distilled Gogilba galaxy . But No,I want to be closer to the truth here and look at the most scary thing in the world right in the eye – provided it has one. 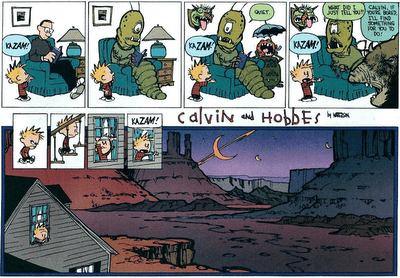 First time I noticed the existence of this entity called a Pressure Cooker was when Hawkins overplayed those curves on tv with ‘chandan sa badan’ playing in the background. It started irritating me after I was pounded by that high decibel hiss every morning while watching Popoye across tea.

‘Amma,can you turn off that thing’, says me

‘its turned off.will you turn off that cartoon ?’ says she

‘dont you have shame,still think you are a kid’ , says she

Well you dont stop being a kid just because you are in yenjinearing college,c’mon.While in transition , Watson, if you’d noticed,we missed the point.Why would a thing make such a loud noise even after the stove is turned off ? What would happen if the stove is not turned off ? Analyze that !

It took a few more years to come face to face with my nemesis .After more than two decades of mom cooks I eat and two years of mallu mess guy cooks I eat, yours truly arrived in the land of the free and home of the brave and you cook if you wanna eat . The food scene is pretty good here for non-veggies,they can eat out all day long and its kinda cheap too.But my roomies being miserably veg and that ancient craving for pappadam oer sambhared rice made us settle down to a once-a-day-hav-food-at-home plan and we decided to take turns in creating some edible object everyday.

In the initial days I used to call up people across timezones for help with cooking.I had visions of the whirling thread of karma everytime the cooking turn rotated and came to me.

me to west-coast friend:
‘this thing….uhhh…whatsit…onion has become that golden colour you told…what do I do now….okei…its becoming brown man…what do i do?’

overheard – one empress of pulissery :
‘avanano vilikanathu…pavam cooking turn aayirikkum ‘ (if the dead body is keechaka,file an FIR against Bheema)

And then it happened.I had these vegetables and dal and tomatoes inside the cooker on the stove.I was in the balcony on phone ending an argument with a friend of mine.

It rhymed and I decided to be a poet and in the kitchen the pressure cooker exploded. It didnt actually explode,that was for special effects . But it made one very evil sound and some foreign liquid and steam started coming out from the sides . Being a mechanical engineer I had sense enough to turn off the stove first . Then I removed that weight on top to let out some steam.
But still the cooker was leaking from the sides and I decided to open it a bit to let out some more steam.I strained all my tricep muscles to force it open and then, it was tragedy.

The substance inside the cooker went up about a feet high and splashed over the stove . I ran like hell . But even then some of the hot particles fell on me . My friends explained the incident in different ways,but I didnt want sympathy,I wanted justice,I wanted revenge.

We never had a normal relationship after that.I cut my fingers once when I was cutting carrots and the cooker hissed right behind me Another time I was taken so much by surprise when the monster hissed that I chanted the four letter word for about five minutes till my hands stopped shaking. 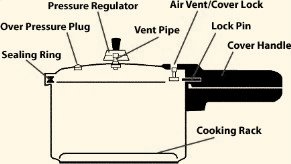 You see the diagram above,did any of us know it was so complex.I didnt know till now . And why would there be so much of safety precautions if it was not dangerous . Even dinosaurs in jurassic park didnt have so many safety locks .Its outright dangerous folks.

Call me paranoid or a coward,but the truth remains that Pressure cooker is the single greatest threat to our way of life.Forget way of life , life . Look at it while it boils like I do (from behind the balcony door),its that evil pressure building up and heat and some strange ‘bhooo’ noise from some deep buried organism . Then the hiss,can any other household object make such a sound,what is it,its just steel right,where does this sound come from . Its evil man,evil. 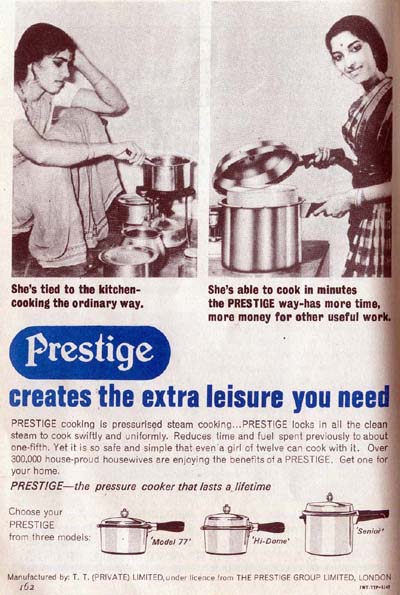 Now I remember it had a cruel soul back in India too.Across households this thing used to blow up and kill cute girls when it realised the whole dowry has not come in.How could it possibly know that.Its scary man,it is.

And you know what,scrub the chromium plating on top of the lid a little and you’ll see the number ‘666’ inscribed there.Now you know. I think it is the anti-christ and its spread into every home.

Some people may actually come back and say that the number is not there on the lid .C’mon folks we cant waste our time on petty evidence. This pressure cooker guy is evil and we need to escape – the question is to be or not to be.