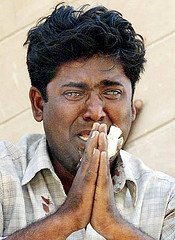 History, despite its wrenching pain, cannot be unlived, however, if faced with courage, need not be lived again – Maya Angelou

A few years back we faced our worst fears as a nation , today we are again a smug faced crowd hiding behind globalised cliches like Islamic terrorism and a global war on terror . This twenty minute video is a gentle reminder to wake up from our collective amnesia and realize the hell we were in and where we could return to.

The Making of a Muslim Terrorist (20 mins , worth it)

It is important for every nation to remember . Because races subjected to long term forgetfulness dont get a second chance on this earth.

A Catholic nun from erstwhile Yugoslavia was cremated by an Indian man of cloth, in an Indian state known for its volatile Hindu population with full state honors accorded by a Communist government. As my clipping correctly reads, this can happen only in India and nowhere else in the world.

Checking client and peer queries on blue Monday mornings, thousands of miles away from Calcutta, my Inbox has Husseins ,Ramaswamies, Habiburs, Kennedies, Yudins, Lees, Romanowskies and the omnipresent Patels, Iyers and Nairs. Replying matter of fact to them without hurting their cultural sentiments or invading the personal zones do not add to my pains on the super highway where we build bridges for a living, because – I’ve maneuvered through flea infested fish markets with an Afghan foreignness at every corner, high decibel noises from Hindu temples and from atop minarets, born again recruiters hunting for new lambs to spread the great news, highly educated neighbours who have gleeful visions of blowing up temples, destroying mosques and yes, invading Pakistan across the Thar desert. Because, I’ve tasted the spicy Indian curry, Period.

Before we embark on the future of Indian secularism or how Indian secularism should be for what future has in it for India let us brush up our basics, it is a cliché, but the truth element in it rather overshadows its repetitiveness – India was, is and will be secular in its thought, philosophy and way of life. The one principal reason for this is the underlying thread of our existence that has been in the genome of every new idea born in this stretch from Garo-Khasi to the Rann of Kutch and from the Hindukush to Indian Ocean in the past four millennia – the continuing or Sanatana Dharma.

The Pancha Bhoota or nature worshippers who framed the early Vedas had this magnificent vision to build a multi-generational enterprise of thought rather than a one that gave great quarter to quarter results, fresh converts revenue or one that went around with tag lines to kill competition. Collaboration was the key word and the vision was simple; whichever way you perceive the truth, whatever names one call it, it is all the same – one truth. So when Vishnu and other Trimurtis came along they were welcomed with open arms, and then came Indra and his hordes of Devas, even God like people from blockbuster poems of the time entered the pantheon. Buddha, Christ, Mahavir, Mohammed, all the Babas, Gurus, everyone, everyone was invited. By the 2001 census this number reached thirty-four crores – around a third of the country’s population. 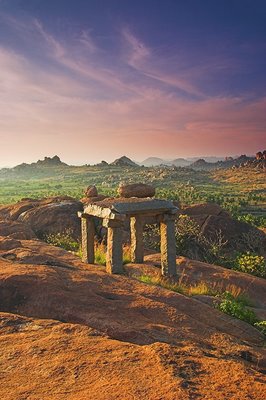 India is a philosophic country, it is our birthright to be outright philosophical and as mentioned above – our thought process gives a thumbs-up for that. The problem is with our social framework, which is rigid, in its apparent and hidden forms. The conflicts we have in India between people who worship any of the above thirty-four crore gods is due to the inherent flab accumulated in the Indian social framework through the years of invasion, persecution, mutually exclusive consolidation and in modern India, cowardly, shortsighted vote-bank politics and legislation. As we try to untie these knots in the Indian gnarl, the greatest advantage we have on our side will be the all-encompassing nature of our very basic mentation.

Indian secularism today is more or less about appeasement of interests rather than keeping the state, its manifestations and its actions away from any religious order. When eighty percentage of the population is Hindu, it is quite natural that the greater fight will be to keep the Hindu fundamentalist ideas from percolating into the national psyche and policymaking. This has happened even in the United States which is surely our best bet of what secularism should be, where currency issued by the government carries the “In God We Trust” tag and Southern states airports and bus-stations have welcome boards saying “Jesus Is the Only way” and the war cry of Air force recruits “Rock Sir”- referring to Peter’s Church.

Back to the Indian picture, let us accept the very fact that a lot more needs to be changed, a lot of baggage dumped and a lot of churning needs to be done to bring the Indian society anywhere near what the worlds strongest democracy is today. Why don’t we have a Uniform Civil Code? Why do we need to have different rules for different communities? The founders of our Constitution agreed to personal laws to give various communities time to evolve so that the particular community’s social practice comes close to the law of the land. Is it not high time we call a time out? Or do we need to wait for another fifty years of riots and discrimination.

Why should we allow Muslim men to marry four times, thereby letting poor Muslim women to rot and at the same time giving enough venom to Togadias and Ritambaras to hit out at the Indian Muslims and the Indian state. Many modern Muslim nations do not have this practice and by no chance they are a species near extinction. Mohammed had his own correct reasons to propound this based on the historical reality at his time. Times have changed, we better.

Is there any justification to the ban on cow slaughter other than appeasement of the Brahmanical Hindu community, what about hens, lambs and yes, fishes – being the first avatar of Vishnu and small Muslim foetuses and children slaughtered by the banks of Sabarmati.We need a ban on these also. Hindu piety has surely not ensured bovines a good life in India.

Do we have any justification for subsidizing Haj.In that case we need to subsidize Catholics every time they want to go to Italy or Israel? This practice should stop once and for all. The havoc that Hindu festivals cause in localities around the country is inexplicable. Especially in crowded cities like Bombay and Calcutta. The blaring noises that come out of loudspeakers from wee hours of the morning to very late at night has nothing to do with devotion .The commercial element in it is naked and transparent too. The clogging of bottlenecks in arterial roads in cities by religious processions like Rath yatras during Navratri and Chadurdhi and for the Friday Namaz has less to do with religion and more an overt show of strength to the common man on what their bunch is capable of.

The rigid social framework will not mutate into a form that is good for the nation in course of time, rather the leniency we show towards these Hindus, Muslims and other groups will be exploited as what is happening now and the differential provisions become traits they identify themselves to. External pressure and path breaking legislations is the way, the legislature and the executive need to go hand in hand without cowardice to shake up the idle social matrix. Resistance will be there from bigots like Imam Bukharis and Singhals, personal law boards and the right wing Hindu groups. But there is no resistance that the Indian establishment cannot stand. Even if the considerations are political, they may loose the support of the hardliners but in turn the moderates in all these fundamentalist groups will be strengthened and there is the wishes and support of one sixth of the human race.

Start off with the Uniform civil code, hit them hard and without discrimination towards any particular group – rather hit everyone and let that be the order of the day. We can afford it. I’m not suggesting something new, this has happened many times before when the Hindu society was reformed and path-breaking laws were put in place.

Religion has always been a part of the Indian political discourse; even the Mahatma had used it several times. But when such discourse is filled with poison aimed at other communities and may in short or long term damage the texture of Indian polity, it should be checked. Even if a vicious speech by Balasaheb or Uma Bharti does not lead to riots, still it should be treated and brought to book with the same seriousness as is done in the United States, France and many other western democracies. There should be a check on these people and their activities and they need to be confronted at every chance possible till they get tired of the persecution from the government backed secular militia. This may sound like an extreme choice given the Indian reality. But even in India lessons can be learnt from the way Communist parties treat these religious fascists- both Muslim and Hindu, in Kerala and the climate of harmony resulting out of it. Surely there will be a dent in the vote bank but as Peter Drucker put it “A Cost for the future”.

We have the issues of extremist and at times terrorist Muslim forces in the country, but no threat is as big as the Hindu extremist forces that have spread into every nook and corner of our public space. The other groups can be contained by legislations and executive actions like in case of Sikh extremism in late eighties. But the Hindutva brigade will have to be treated differently. They have to be checked at every walk of life starting from education, media, literature, arts, business, food, clothing, and history. The list will be long.

The extremist forces will be there in Indian polity till religion exists amongst us. It will manifest itself in different political parties like Congress, BJP, Sena and the like. The secular forces will also be there to fight the bad guys. It’s the age-old struggle between good and bad for the basic right to live as equals in this land, the great unending struggle for dharma to win – the game of Mahabharata.

There are no hereditary claims to Indian secularism; it is an everyday struggle where parties may be on either side any given day. And whenever this secular democracy is toppled from her balance, the Indian people have a unique habit of going directly to the polling booth and setting the republic straight. Two summers before was just another instance. We are capable of doing that again by our-selves, to both the extremists and the pseudo-secularists. Perhaps, this is what we celebrate and call Independence.