In the line of fire

Home/India/In the line of fire

In the line of fire 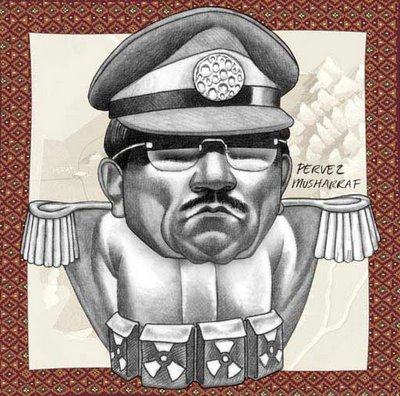 Pakistan’s self appointed Head of state and erstwhile coup leader Pervez Musharraf has released his autobiography ‘In the Line of Fire’.Key excerpts from the book has been published by BBC, Khaleej Times,NDTV,Pakistani Dawn,Jang and Guardian. I feel a few things he has said might be funny – like toppling a democratically elected government or mowing down rebels in Baluch and NWFP.

Mush : “the initial signs of sincerity and flexibility that I sensed in Manmohan Singh seem to be withering away. I think the Indian ‘establishment’ – the bureaucrats, the diplomats and intelligence agencies and perhaps even the military has had the better of him”

OHYEAH Mr Mush, India has a long history of military bureaucracy getting the better of the elected democratic government. 33 out of 48 years of the Republic,it was India which was under military rule. Nice that you reminded.

Mush : says, India obtained its Nuclear centrifuge and some of its missile technology from Pakistan through A Q Khan’s dudes in Dubai.

You know what, the authour of Indian bomb programme and Pakistan bomb programme reside in New Delhi,the capital of India. The first one resides in Rashtrapati Bhavan, the second one is a India Today reporter who on an overdose of ecstasy, wrote you guys had a nuclear bomb ( someone in Pakistan read the article and then you guys started claiming you had THE bomb )

Bottomline is YOU DONT HAVE THE BOMB (You want one ? We’ll drop one over Karachi)

Mush : On why he had to align with US on 9/11 “America was sure to react violently, like a wounded bear. If the perpetrator turned out to be al-Qaida, then that wounded bear would come charging straight towards us. Powell was quite candid: You are either with us or against us”

“The mullahs would certainly oppose joining the US. There would be an adverse reaction too in the NWFP. Sindh, Karachi and Balochistan would be lukewarm. The Punjabis would understand me.”

You are the leader of ?
Have you heard of Rushdie’s novel “Shame” – have you atleast heard that word.

“In what was to be the most undiplomatic statement ever made, Armitage added, if we chose the terrorists then we should be prepared to be bombed back to the Stone Age.”

Where do you suppose you are now ?
They cheated you man,these Americans – do you think they landed on moon ?

Mush : On the Agra summit failure “There is the man and there is the moment. When man and moment meet history us made. Vajpayee failed to grasp the moment and lost his moment in history”

We dont mind a Ibrahim,Dawood smuggling gold from Dubai – at times we adore his tapori style but he’ll pay for the two fifty seven dead in Bombay ’93.

We dont mind a Prabhakaran,Velupillai playing a tiger or a lion for his brothers – at times we sympathize with his cause but he’ll pay for our youthful leader’s life he took in May ’91

We dont mind a Musharaff, Pervez writing an autobiography – at times we make it a best-seller but he’ll pay for the five hundred and twenty two young men dead in Kargil ’99

So make merry – now you have a best seller

this time its for you